By Erin Gilmore for Practical Horseman

A Californian makes her trip north to Calgary worthwhile, scoring a big win on a special horse.

October 30, 2016 — Jenni Martin McAllister and LEGIS Touch the Sun opted out of the riskiest turn on course and won big in the $132,000 Longines FEI World Cup™ Jumping Calgary at The Royal West CSI3*-W after others left the door wide open.

The American athlete who traveled from Southern California to Calgary, Alberta, Canada seeking Longines FEI World Cup™ Jumping North American League qualifying points got what she came for, making the 30-hour drive and a bout with the flu well worth it.

A total of 21 riders turned out for this, the feature event of The Royal West’s two week-run at the Calgary Stampede grounds in downtown Calgary. This competition, which is one of 14 chances for riders to qualify for the 2017 Longines FEI World Cup™Jumping Final in Omaha, Nebraska, is just three years old but has every indication of a bright future with the quality of competition and atmosphere it attracts.

Show organizer John Anderson of Rocky Mountain Show Jumping quite literally practices what he preaches: the experienced rider and Olympic veteran was also a participant in the competition. While rails down with his mount kept him out of the ribbons, he noted that, “seeing the quality of the horses that are showing up and the quality of courses that are being built here makes me almost as happy as if I were in the winner’s circle.”

Almost being the operative there. The happiest rider of the evening was undoubtedly Jenni, who tonight was wearing the ornate belt buckle that she won in her last grand prix, and now has a brand new Longines watch to add to her treasure chest.

Jenni picked up points last week at the Longines FEI World Cup™ Jumping Del Mar, but it wasn’t easy. She battled a severe flu for several weeks, worrying her husband and team. But her health returned just in time this week, making her glad that she pushed on to travel directly from Del Mar to Calgary, to compete at The Royal West.

With seven riders qualified for the jumpoff, the class could have been anyone’s game if not for fallen rails. By the time Jenni entered the arena as second-last to go, only one other pair—Canada’s Laura Jane Tidball with Prim’ De Lairaud—had jumped clear. An inside slice over a tall Calgary vertical in the middle of the arena was saving riders time, but at the last moment, Jenni decided not to take it.

“I actually changed my mind in the middle of the jump-off,” she explained. “I was planning on doing that inside slice and that horse is really good at it. He’s not as fast because he jumps high, and he was jumping so high that I kind of got in trouble at the first in and out. And when I landed there I thought, ‘no, just go around.’ And he stepped up and did what he needed to do.”

Her time on zero faults of 41.88 seconds moved ahead of Laura Jane, who had crossed the timers in 42.70 and was pushed to 2nd place. It was a finish that the Vancouver native was thrilled with, and she pumped the air after her horse gave her two clear rounds.

“I went in the ring trying to be quick enough, but I knew there was no way I’d be as fast as the four faulters,” Laura Jane explained. “My horse hasn’t had a jump down in two weeks, and I really trusted his scope and his carefulness to take me around. I knew if I could lay down a good clean trip and make everyone else chase me I would have a shot at a good ribbon.”

With only Chris Surbey of Canada to challenge Jenni’s time after that, she had a top ribbon all but sewn up, and when Surbey ticked the A element of the PandaHaus double combination early on course, shouts of celebration rang out from her team beyond the ingate.

Jenni has shepherded LEGIS Touch the Sun up through the ranks since his five-year-old season. He was originally imported to California by her sponsors as a sale horse, but soon after she started riding him, she felt something special and vied to keep him. Since then his experience at the top level has been limited, but Jenni was not surprised by the night’s finish.

“For a long time I’ve been saying to my husband, ‘it will really be something if I can get a horse that can win these classes,’ and all along I’ve believed he can be that horse,” she said. “I’ve just been one time, to the 2014 Longines FEI World Cup™ Final. That year I wasn’t expecting or planning to go, but this year I started out wanting to go, and when he was great at Sacramento, I made up my mind early to skip a couple other shows and come here to Calgary.”

Jenni, her husband Steve, and her brother-in-law Joe McAllister hauled their own horses all the way to Canada from their base in Sun Valley, California. Jenni and German rider Christian Heineking were the only two riders who pressed on after Del Mar to jump at Calgary. It was a tight schedule, but despite being held up in customs at the Canadian border, it was a trip that all parties agreed was worth it. Jenni also won the previous evening’s $10,000 Costume Four Bar, clearing 1.95m with Otard.

With the points accrued at Calgary, Jenni makes a big jump up the Longines FEI World Cup™ Jumping North American League – Western Sub League Standings. She is now sitting in second place, just two points off the leader Karl Cook. It’s a great position to be in with just three qualifiers left, and Jenni now has the next stop on the calendar, at Las Vegas, firmly in her sights. 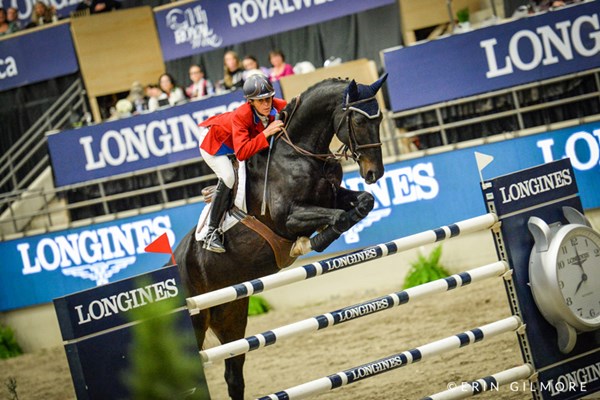