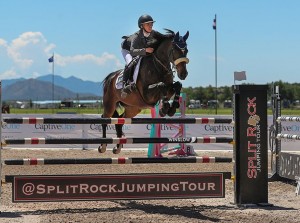 For Kylie Perkins, horses are in her blood. As the daughter of Cecily Perkins and the niece of Jenni McAllister, she spent her childhood running wild on the horse show grounds. She won her first blue ribbon in her very first lead line at the age of five, on a pony led by her Aunt Jenni at HITS Indio. She started her riding education immediately following on a 20-year-old pony that had never learned to jump. His constant refusals led to a lot of falls but eventually her persistence paid off. Kylie learned not only how to stay on top but how to work with her pony and the two started learning to jump together.

The next step in her riding career came at the age of eight when she received her first horse, a gift from her Aunt Jenni. Ned was a green five-year-old out of Jenni’s legendary Grand Prix horse Apple Annie. There was a steep learning curve for both Kylie and Ned and she spent the first few months in lunge line lessons to learn how to ride him. Their hard work paid off and she took Ned all the way up to the 1.10m jumpers and competed in several children’s medal classes with him. During her middle school years, Kylie and Cecily were with Jenni and Steve on the A show circuit in Southern California where she competed heavily in the hunter, jumper and equitation rings.

During her high school years, her family moved back to Oregon and Kylie took up several western riding disciplines including barrel racing, roping, team penning and joined the drill team. She competed and placed in all of these events at the state level and by her senior year was also state champion in steer daubing – a timed event where you chase a cow from horseback and daub it with paint. She also continued with her jumping and dressage training and was district champion in both three years in a row. Kylie also furthered her equestrian education by learning to start or break young horses. She started her own Hanoverian under saddle with the help of her mother and brought him up to a competitive jumping level.

After graduating high school, Kylie moved into the horse world full-time and went to work for a top level cutting horse barn for the next 3 years. She continued to fine tune her skills at starting young horses, along with immersing herself in the areas of horse care, grooming, show management and client relations. Returning to her family and the hunter/jumper world, Kylie is excited for what the future holds with Team McAllister. As a rider and trainer, she brings a wealth of education and experience along with a love and talent for teaching young horses.